Round Six and Seven Recap from Denver, CO - Arenacross 2020 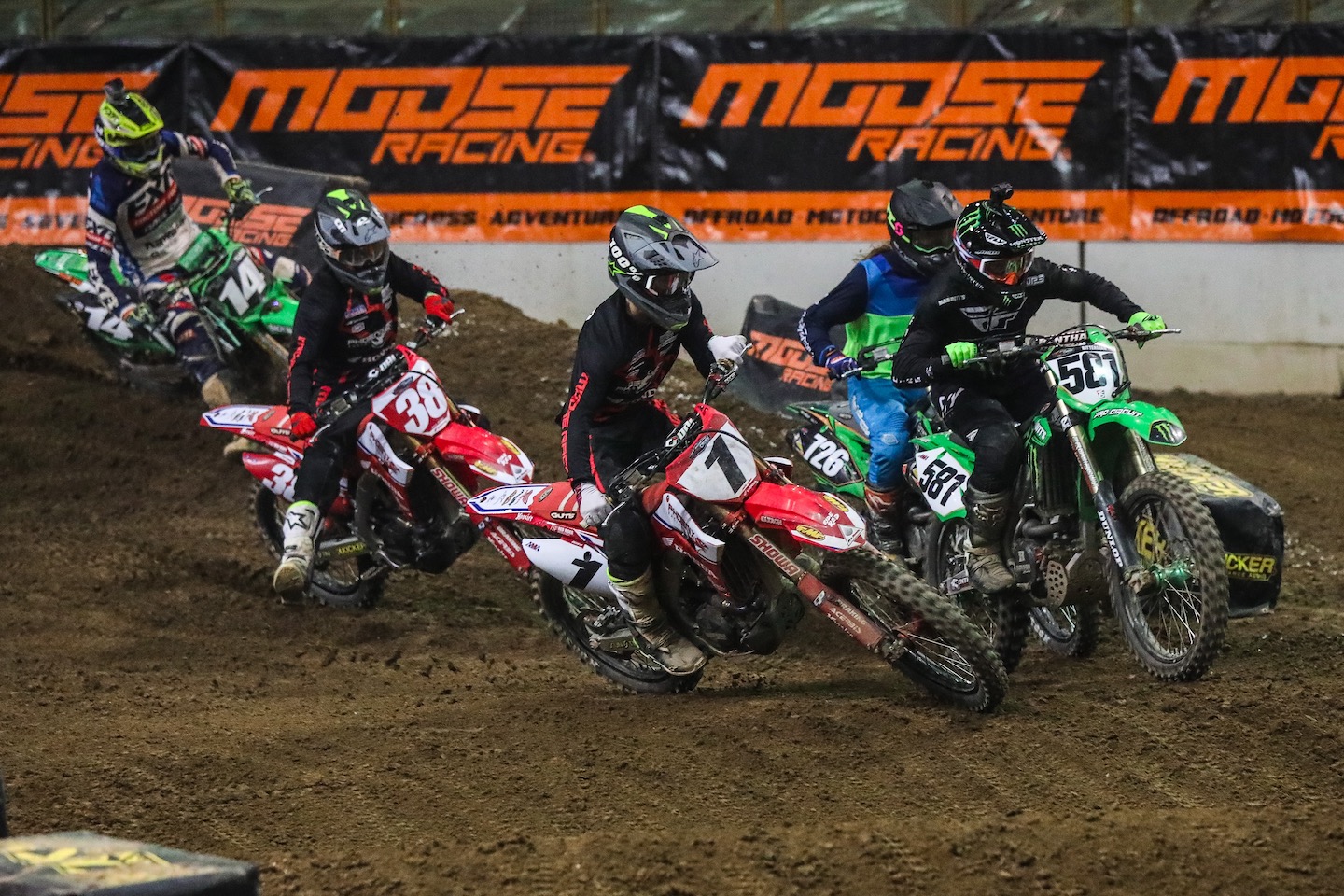 Phoenix Racing Honda Team Rider, Kyle Peters, continued his win streak, sweeping all four pro classes over the weekend. But these didn’t come as easy as the wins in Guthrie, Oklahoma. Jace Owen looked to be getting back into the groove of things and put out some solid performances himself, and he continues to be itching for another pro main win. Kyle Bitterman, who has been riding solid all series, made some major moves this weekend too. You can tell he is hungry for a win and if things keep on the way they are, it seems likely he will find that top podium spot at some point in this series.

Round Six of the 2020 AMA Kicker Arenacross Series took place at the National Western Events Center on Friday, January 31st.

The 450 Pro Heat races proved to be drama-free as well. Jace Owen won the first heat, followed by Gared Steinke in second and Richard Jackson in third. Heat two was won by Kyle Peters, followed by Kyle Bitterman (2nd) and Rustin Meyer (3rd).

The 250 Pro Main was dominated by Kyle Peters. Peters had the outright lead by the first corner and rode a near perfect race through the final flag to secure the win. Jace Owen rode well and was securely in second place throughout the race, but never got close enough to Peters to challenge the top spot. The real battle in the 250 Pro Main was for third place, as Kyle Bitterman, Gared Steinke and Richard Jackson all raced neck and neck throughout the 12 laps vying for the final spot on the podium. Bitterman pulled into third for the final few laps and hung on to this spot to finish.

The 450 Pro Main was possibly the most exciting pro race of the season, definitely of the weekend. Defending champion Jace Owen took the lead early and and held strong for the majority of the laps, but with every passing lap, Kyle Peters was closing the gap little by little. Just when it looked like Owen may be able to hang on to this one and get the win, Peters passed Owen on a corner turn and held on to continue his winning streak. Similar to the 250 Pro Main was another battle for third between Bitterman, Steinke and Jackson, with Bitterman hanging on to take third again.

Round Seven of the 2020 AMA Kicker Arenacross Series took place on Saturday, February 1st at the National Western Events Center.

The 250 Pro Main Heat One kicked off the show with exciting action. Gared Steinke and Kyle Bitterman battled until the very end for first place in the heat. Steinke held the lead throughout, but Bitterman appeared to be poised to take over at every turn. Ultimately Steinke held on and won the heat, followed by Bitterman in second and Richard Jackson in third. Heat two was won by Kyle Peters, followed by Jace Owen (2nd) and Greye Tate (3rd).

The first heat of the 450 Pro Heat brought us our second Peters vs. Owen match up of the night. Peters took the lead pretty early on and after some solid racing, won his fourth heat of the weekend. Owen finished in second and Zachary Butkiewicz came in third. The second heat brought us a rematch of Steinke vs. Bitterman from the first 250 Pro heat. This time, however, Bitterman got the lead early over Steinke and hung on to win this one, followed by Steinke (2nd) and Jackson (3rd).

For the second night, the 250 Pro Main was again dominated by Kyle Peters. The real battle of the race was for the second and third spots, between Kyle Bitterman, Jace Owen and Gared Steinke. All three stayed in close proximity the majority of the the race. Bitterman, who seemed to be gaining ground and confidence with every race this weekend, edged out Owen and secured the second place finish. Owen took third overall.

Saturday night in Denver brought us another exciting 450 Pro Main, but not because of Owen vs. Peters. Bitterman took an early lead in the 450 Pro Main and as the laps progressed, it looked like we may have a new main race winner outside of Owen and Peters this series. Ultimately Peters found a way and passed Bitterman to take the lead and the win. Bitterman came in second and Owen came in third.

Bitterman has been exciting to watch all season and with every race he inches a little closer to that top podium spot in the main race. He’s still got five more rounds of racing to get that win, and we can’t wait to watch him try. 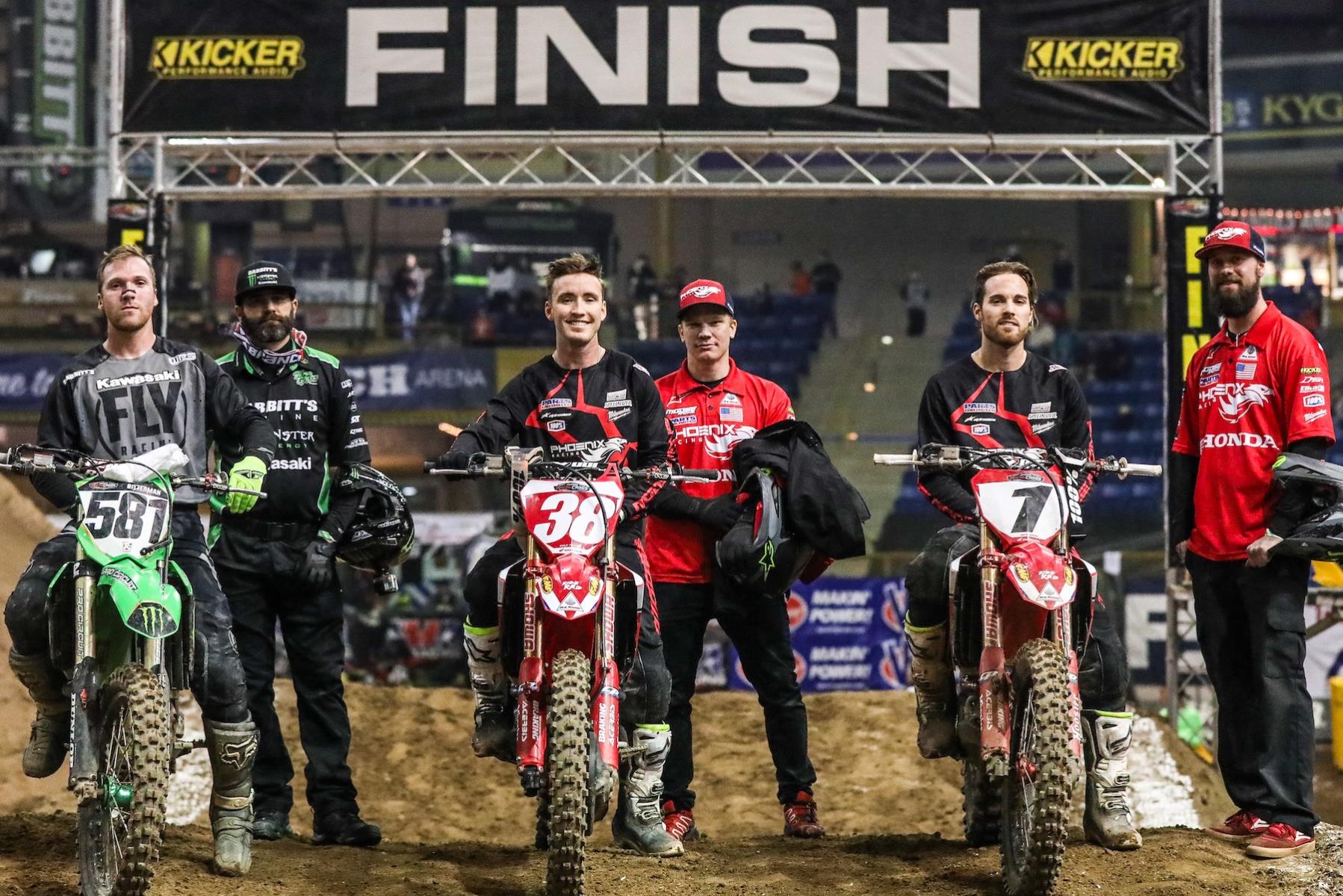 Round Six, Seven and the Overall Standings are as follows: 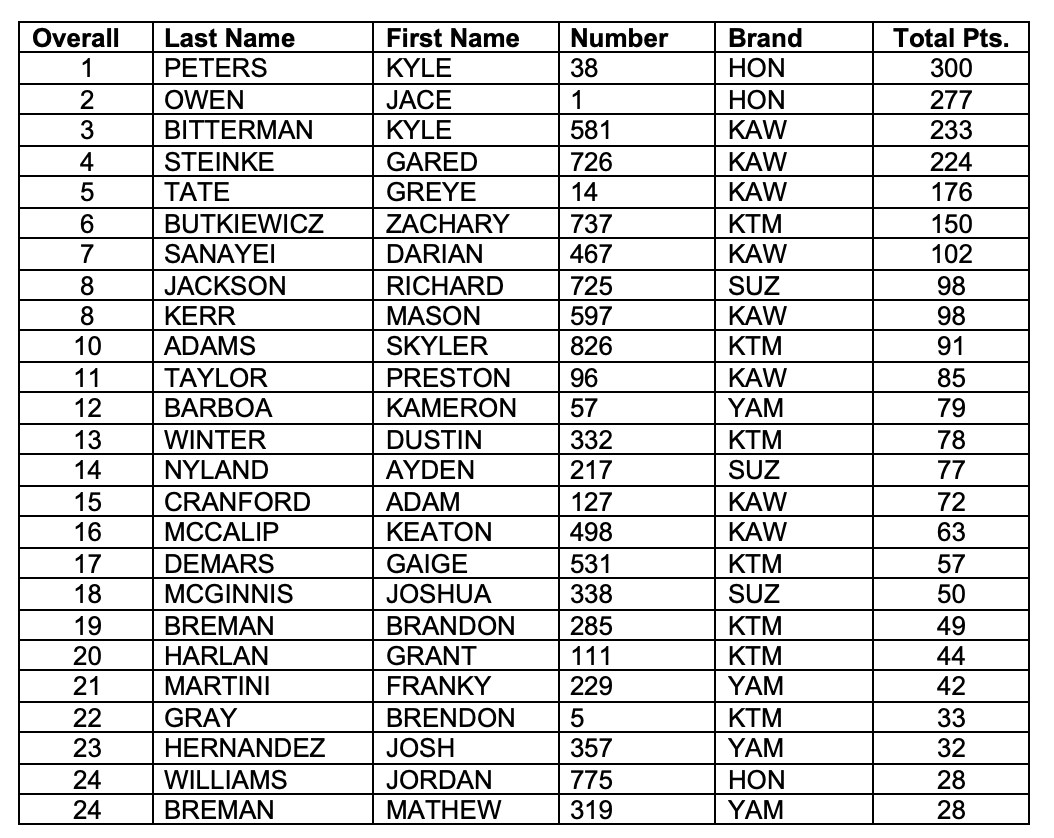