Rounds eight and nine took place this past weekend at the Reno-Sparks Livestock Events Center in Reno, Nevada. 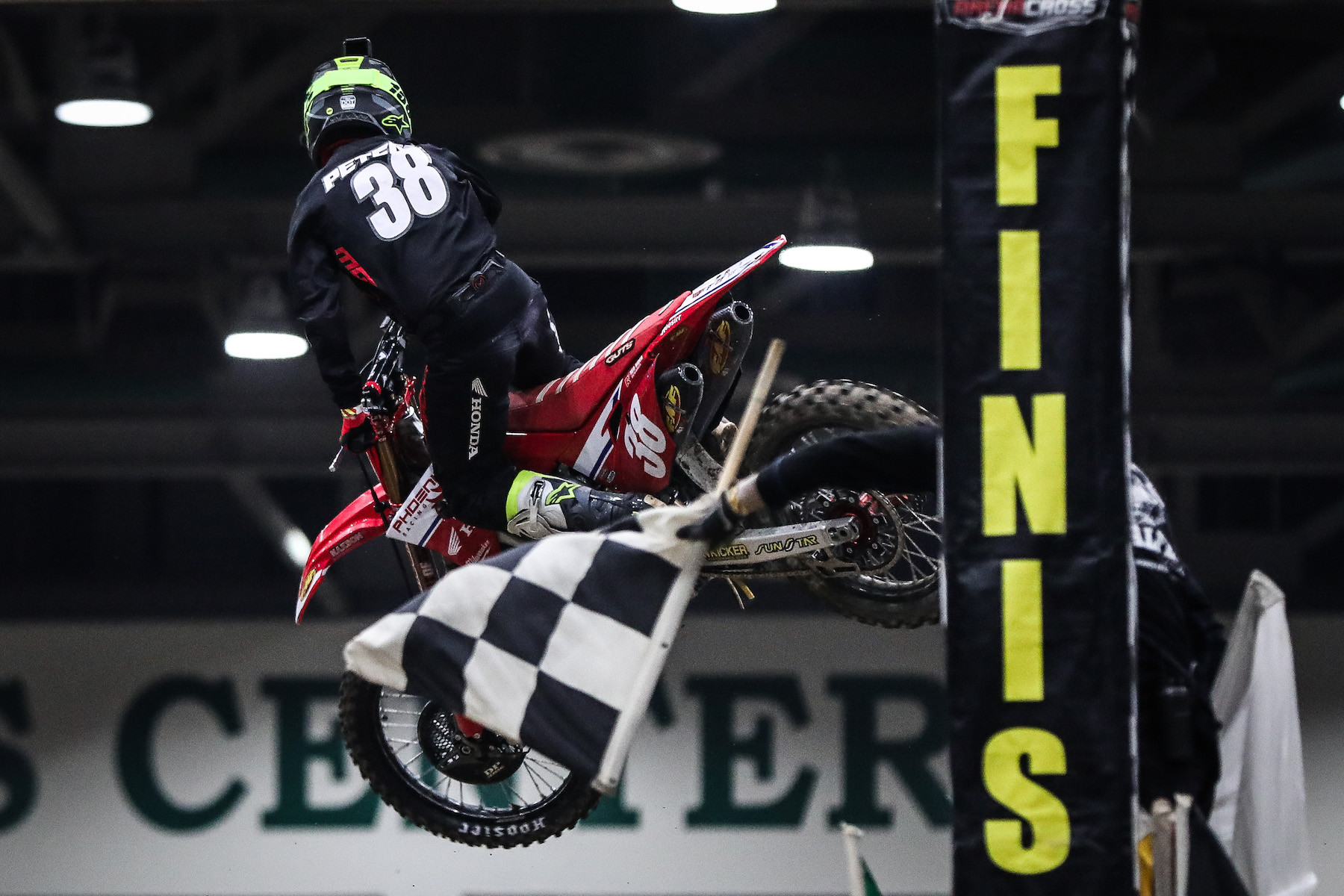 Phoenix Racing Honda Team Rider, Jace Owen, found the top of the podium for the first time in a few weeks, and series competitors, Kyle Bitterman and Gared Steinke, put on some impressive racing performances over the weekend.

Round Eight of the 2020 AMA Kicker Arenacross Series took place on Friday, February 7th at the Reno-Sparks Livestock Events Center.

Heat one of the 250 Pro Sport class kicked off the weekend. Kyle Peters took first place, followed by Kyle Bitterman in second and Greye Tate in third. Jace Owen came out solid in heat two and found the top of the podium, followed by Gared Steinke (2nd) and Skyler Adams (3rd).

The Phoenix Racing Honda Team boys squared off in heat one of the 450 Pro Sport class. Owen continued to ride strong, but Peters was able to win this one. Owen came in second and Zachary Butkiewicz came in third. The second heat was a battle between Kyle Bitterman and Gared Steinke for the top spot, Steinke was able to snag the win, followed by Bitterman and newcomer, Kinser Endicott in third.

The 250 Pro Main kicked off with some immediate drama, with both Gared Steinke and Kyle Bitterman crashing. Steinke ultimately did not finish the race, and Bitterman spent the 12 laps battling to move back up the ladder for a spot on the podium. It looked like Skyler Adams was going to hold off Bitterman and take the third spot, but at the literal last second Bitterman charged ahead and came in third. Amidst the action from Bitterman, the battle for first place was also thrilling. Jace Owen started with lead and maintained it throughout, but at every turn Kyle Peters was right on his tail making it anyone’s race. Ultimately Owen fought hard and hung out to secure the win.

The 450 Pro Main was a little less tame than its predecessor. While Owen tried to press Peters and take another win, ultimately Peters reclaimed his spot at the top of the podium, with Owen followed behind in second. Another epic battle between Bitterman and Steinke took place for the third spot, and Steinke, who had been riding well all evening, nabbed the third spot in the class. 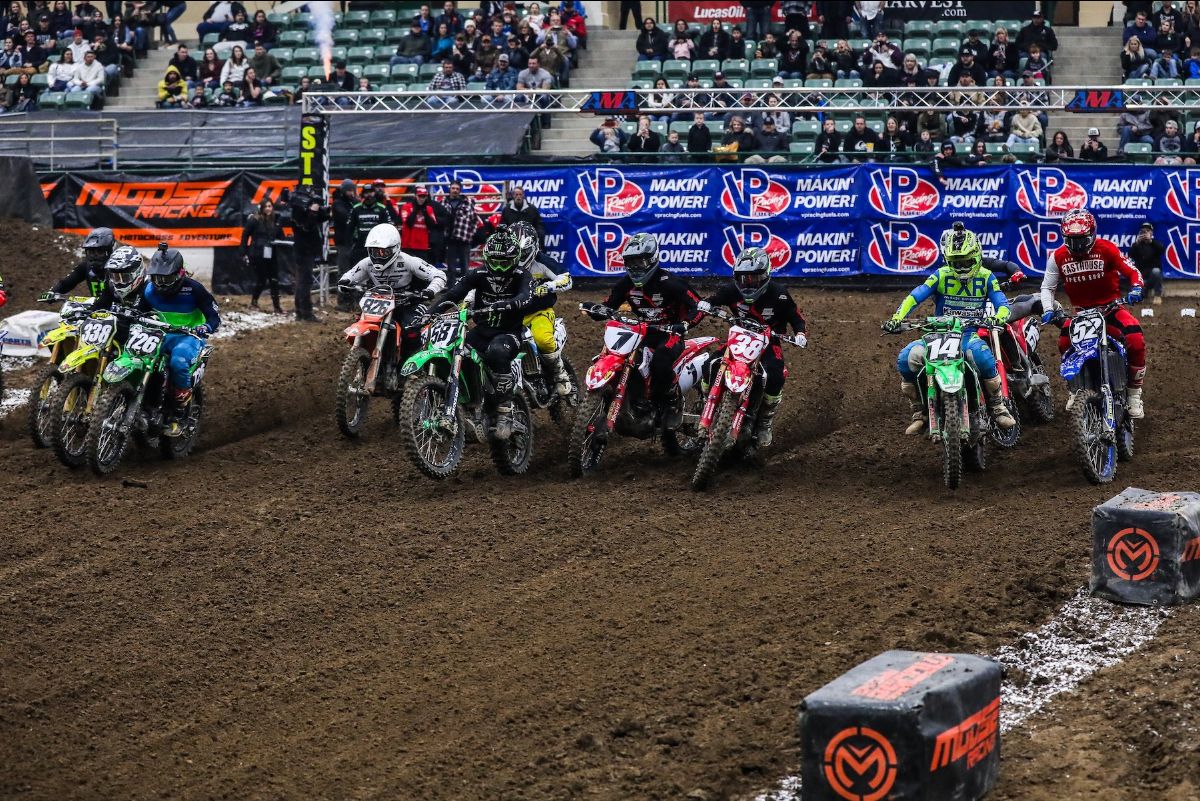 Round Nine of the 2020 AMA Kicker Arenacross Series took place on Saturday, February 8th at the Reno-Sparks Livestock Events Center.

Heat one of the 250 Pro Sport class on Saturday night followed suit with the evening before. Kyle Peters took first place, followed by Kyle Bitterman in second and Greye Tate in third. Jace Owen won heat two, with Gared Steinke coming in second and Zachary Butkiewicz in third.

Gared Steinke continued his strong riding over the weekend in the exciting first heat of the 450 Pro class as he got the win over Kyle Peters. Newcomer Kinser Endicott came in third. Owen continued his heat winning streak in heat two, followed by Kyle Bitterman (2nd) and Franky Martini (3rd).

Round nine’s 250 Pro Main brought the drama again. Jace Owen proved to be unlucky and went down during the main, and spent the race fighting his way back up for a spot at the top. Owen ultimately fell short, and landed in fourth place. Series racer Greye Tate also had some trouble as he faced a shift issue on the pro double that caused him to crash and get landed on. Tate was ultimately unable to finish the race, but he is recovering now and expected to be back for Round 10 in Salt Lake City. Kyle Peters finished first in the class, followed by Kyle Bitterman (2nd) and Gared Steinke (3rd).

Kyle Peters continued his win streak in the 450 Pro Main on Saturday night. Back on his tail was Jace Owen, looking for some redemption after his 250 Pro finish, which he got as he came in second place. Kyle Bitterman battled Kinser Endicott and Gared Steinke for the third spot on the podium, and Bitterman prevailed.

Kyle Peters and Jace Owen continue to impress in the 2020 AMA Kicker Arenacross Series, but with each passing week Kyle Bitterman and Gared Steinke continue to improve and get a little bit more hungry for a first place finish in a pro main.

Round Eight, Nine and the Overall Standings are as follows: 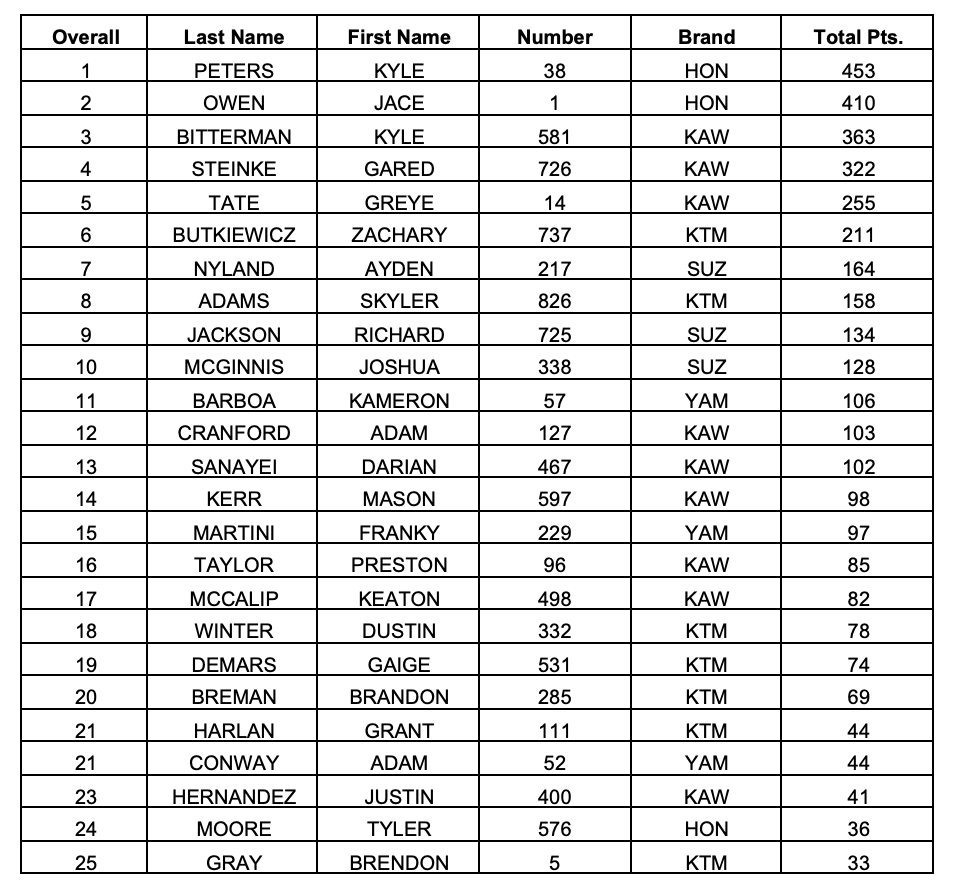