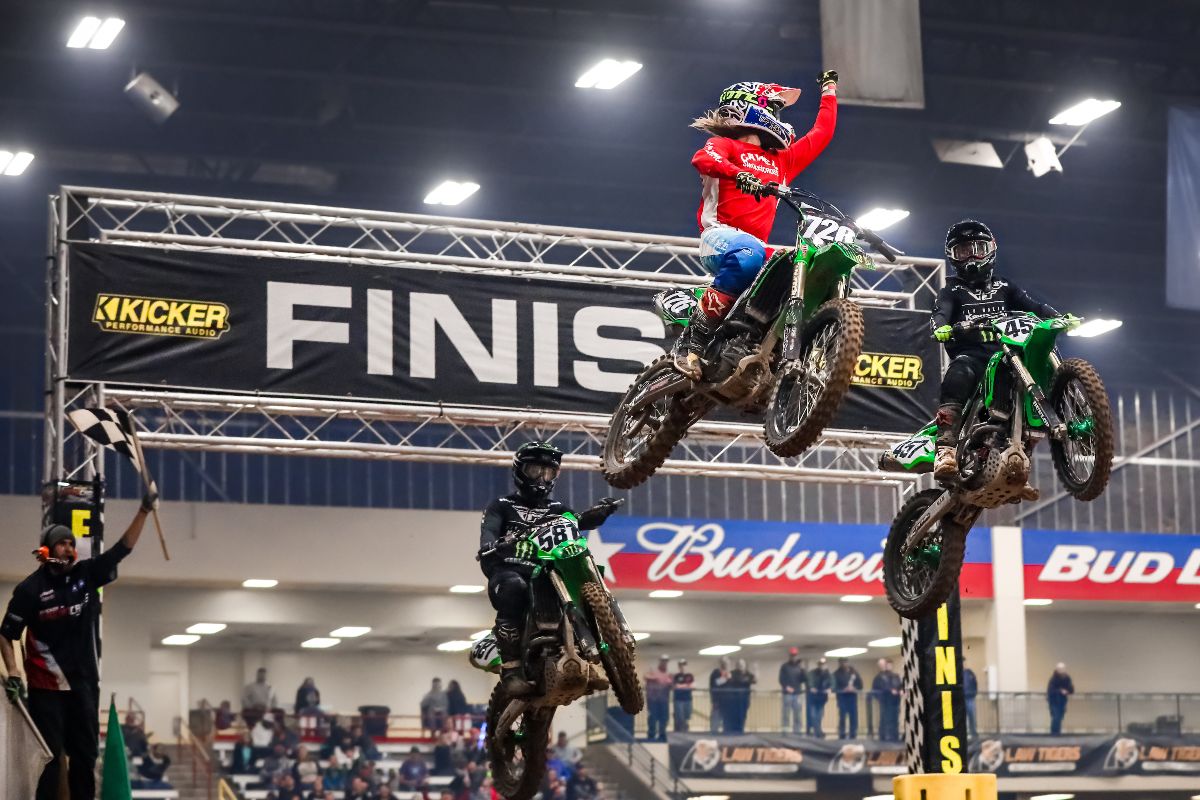 Amarillo, TX (March 9, 2020) - The final round of the AMA Kicker Arenacross Series wrapped up in Amarillo, Texas this past Saturday.

Though Kyle Peters secured his win the weekend before in Salt Lake City (thus sitting out this event in Amarillo) the rest of the top five spots in the Pro Series were still up in the air and the racing was as exciting as ever in the final two races of the season.

Gared Steinke, Kyle Bitterman and Darian Sanayei showed up in Amarillo ready to ride and boy did they ever. The three put on a heck of a show during the 250 Pro Main in what was easily the most exciting battle of the entire series. 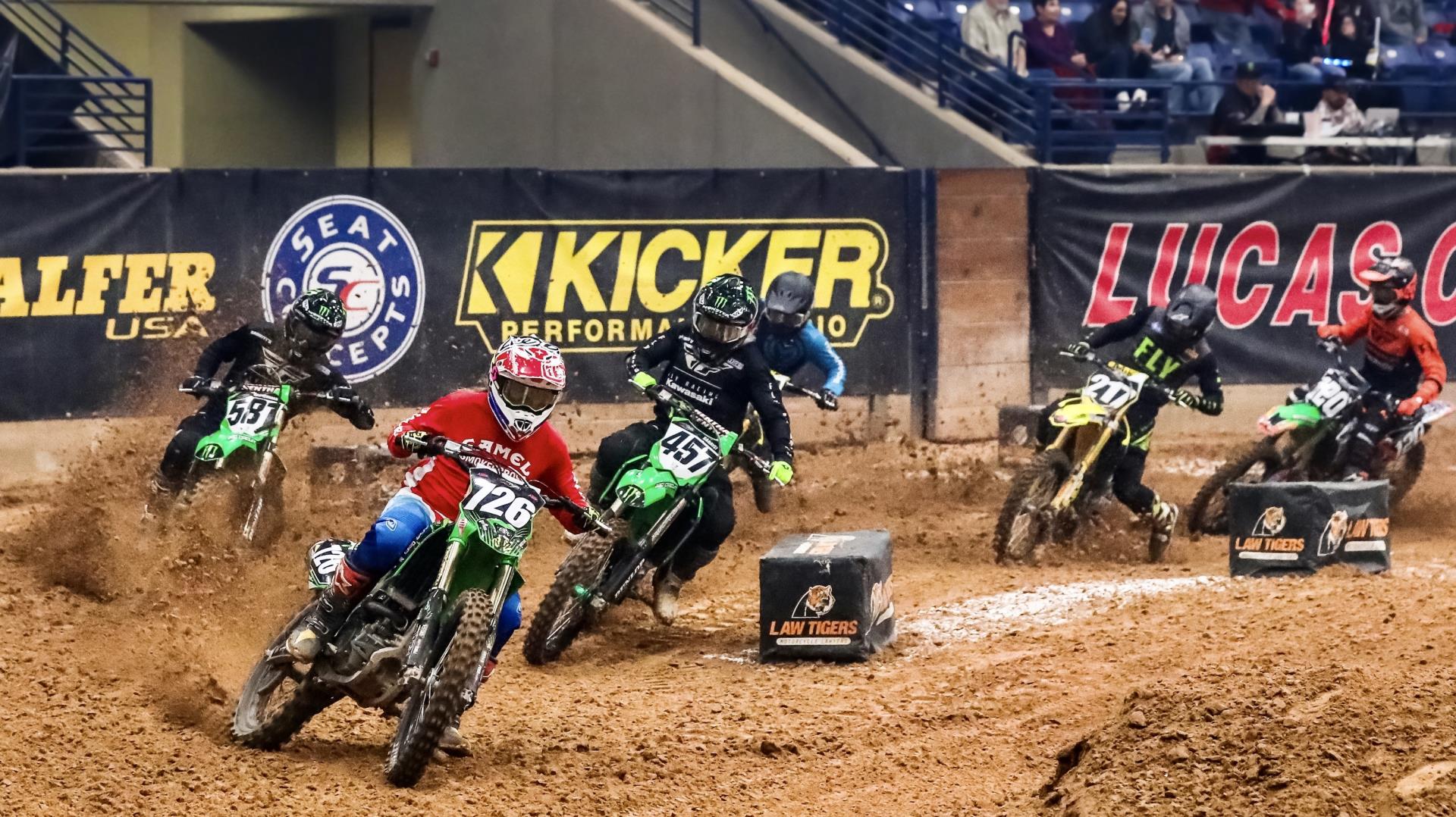 Round Twelve, the final of the 2020 series, took place at the Amarillo National Center in Amarillo, Texas on Saturday night.

As usual, the 250 Pro Sport heat races kicked off the show. Kyle Bitterman won the first heat, followed by Geran Stapleton (2nd) and Jaylend Mccarty (3rd). Gared Steinke won heat two ahead of Todd Bannister in second and Greye Tate in third. Darian Sanayei got boxed out by Steinke on the first lap of heat two and was unable to finish the heat race. 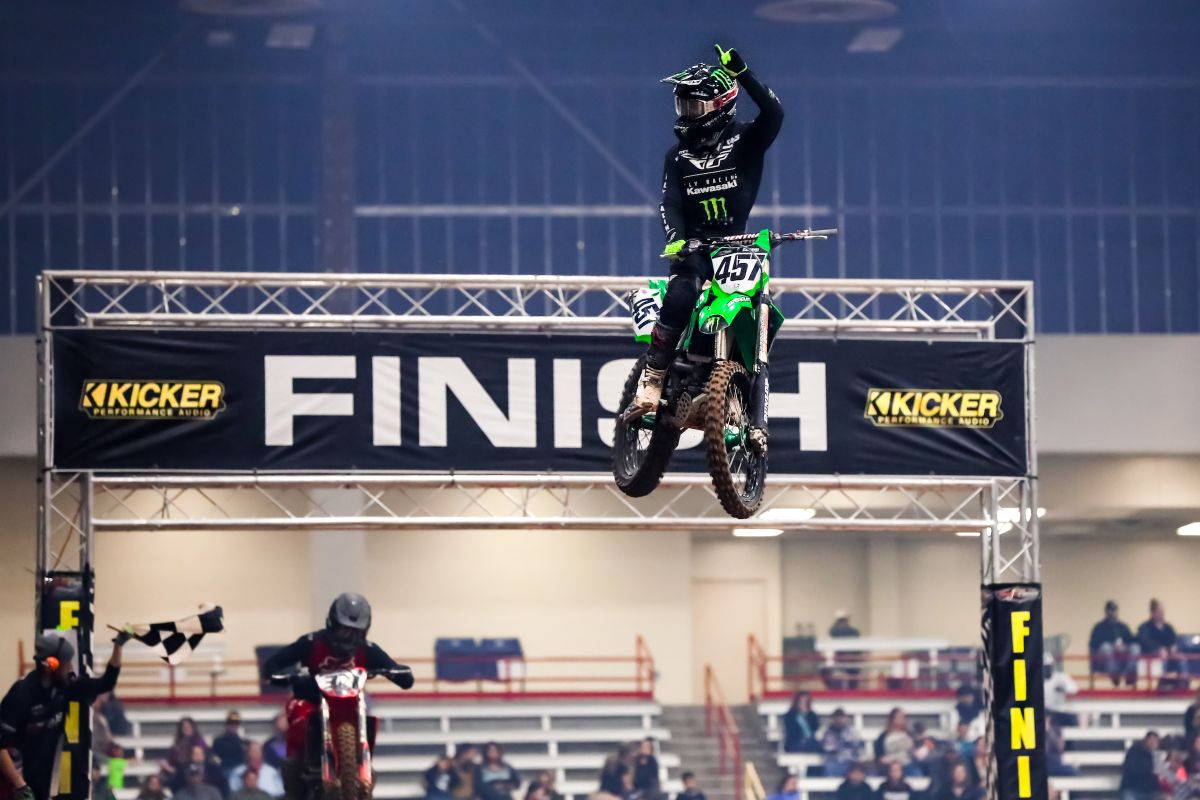 Darian Sanayei was back for the 450 Pro Heats and won heat one. Kyle Bitterman finished second and Todd Bannister came in third. Gared Steinke won the second heat ahead of Geran Stapleton (2nd) and Jaylend Mccarty (third).

The race of the night (and quite honestly, of the season) was the 250 Pro Main. The race started out as a battle between Kyle Bitterman and Todd Bannister fighting for first place through the first lap, with Gared Steinke right behind. But by the end of the second lap Steinke had moved into first place, followed by Bitterman in second and Bannister in third. During the third lap it became clear this race was going to be a battle to the finish between Steinke and Bitterman. Bitterman moved ahead of Steinke by the end of the third lap and held onto the lead (just slightly) through lap 10 and almost all of lap 11, but on the final turn before the finish line on the second to last lap, Steinke cut inside and was able to pass Bitterman for first. Darian Sanayei, who had been in 5th place for most of the race, had slowly but surely moved his way, somewhat unnoticed, into third place by the end of the race. The final lap of the race it almost felt like Steinke, Bitterman and Sanayei were all literally even with one another, it appeared that any of the three could be in first place at any moment. A thrill to the end, Steinke came in first ahead of Sanayei (2nd) and Bitterman (3rd). Steinke finished ahead of Sanayei by 0.097 seconds and ahead of Bitterman by 0.235 seconds. To say it was an 'edge of your seat' kind of race to the finish would be an understatement.

Following the 250 Pro Main excitement, Sanayei and Bitterman were looking for a little race redemption when the 450 Pro Main came around. It came as no surprise that this was yet another battle between Steinke, Bitterman and Sanayei. Only this time the results were a little different. Bitterman was unlucky on lap one and got blocked on a turn and fell over causing him to spend the race playing catch up from the back of the pack. He was able to get back into third place and make a push for second, but ultimately cameI fi up short. Sanayei was able to close the narrow gap from the race before and edged out Steinke for the top spot on the podium. Sanayei won the race, followed closely behind by Steinke in second and Bitterman in third. 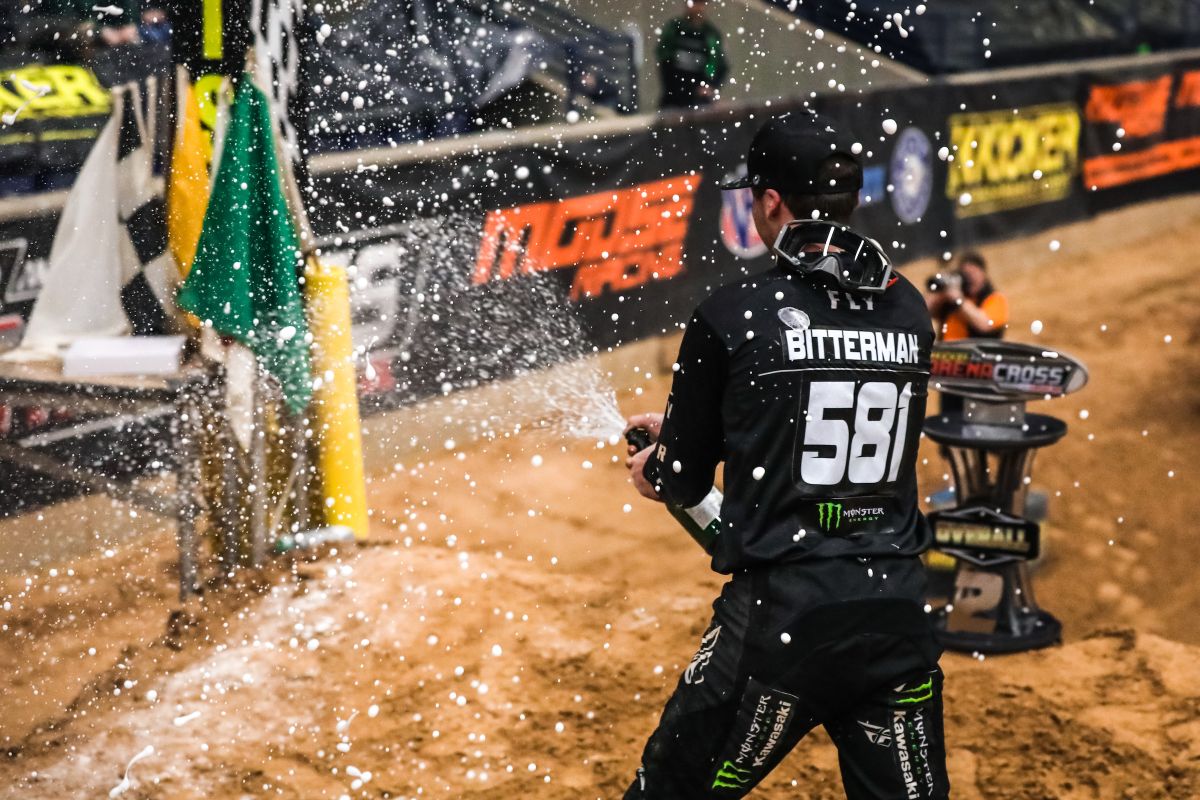 With that, the 2020 AMA Kicker Arenacross Series comes to a close, with exciting race action in Round 12 to wrap it all up. 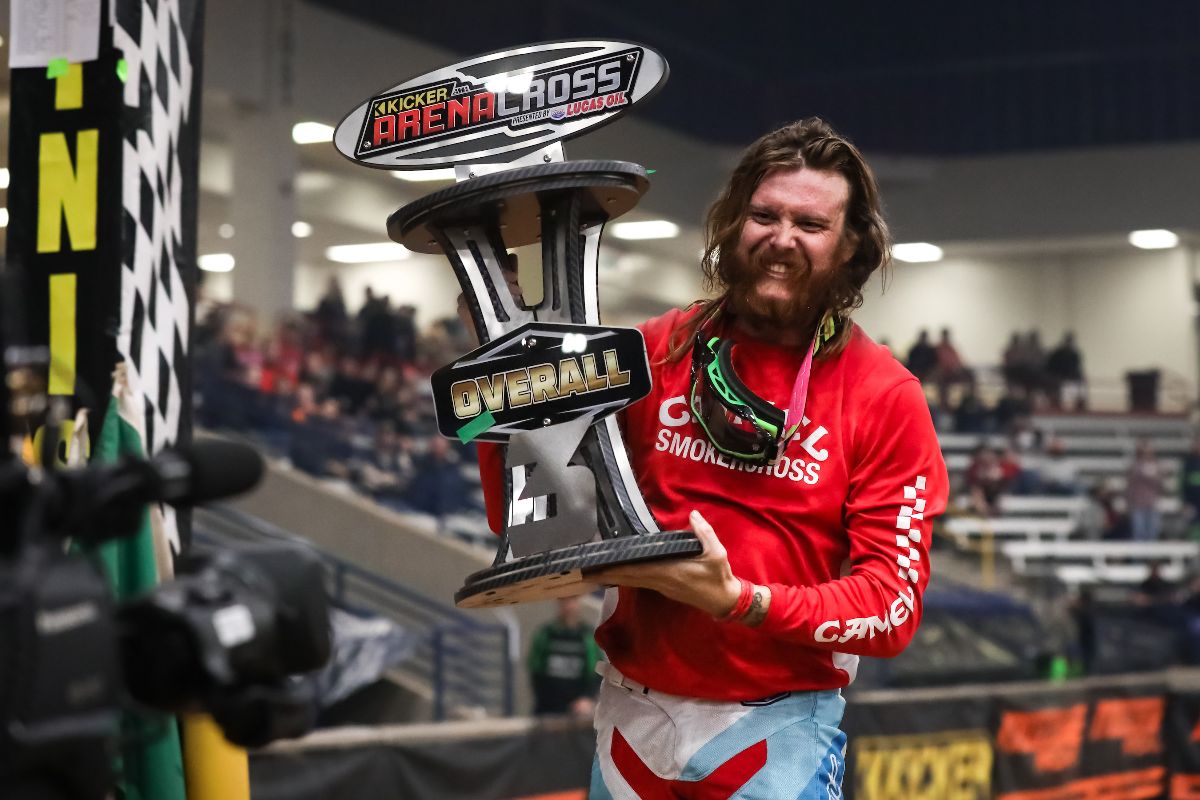 Round Twelve and the Final Overall Standings are as follows: 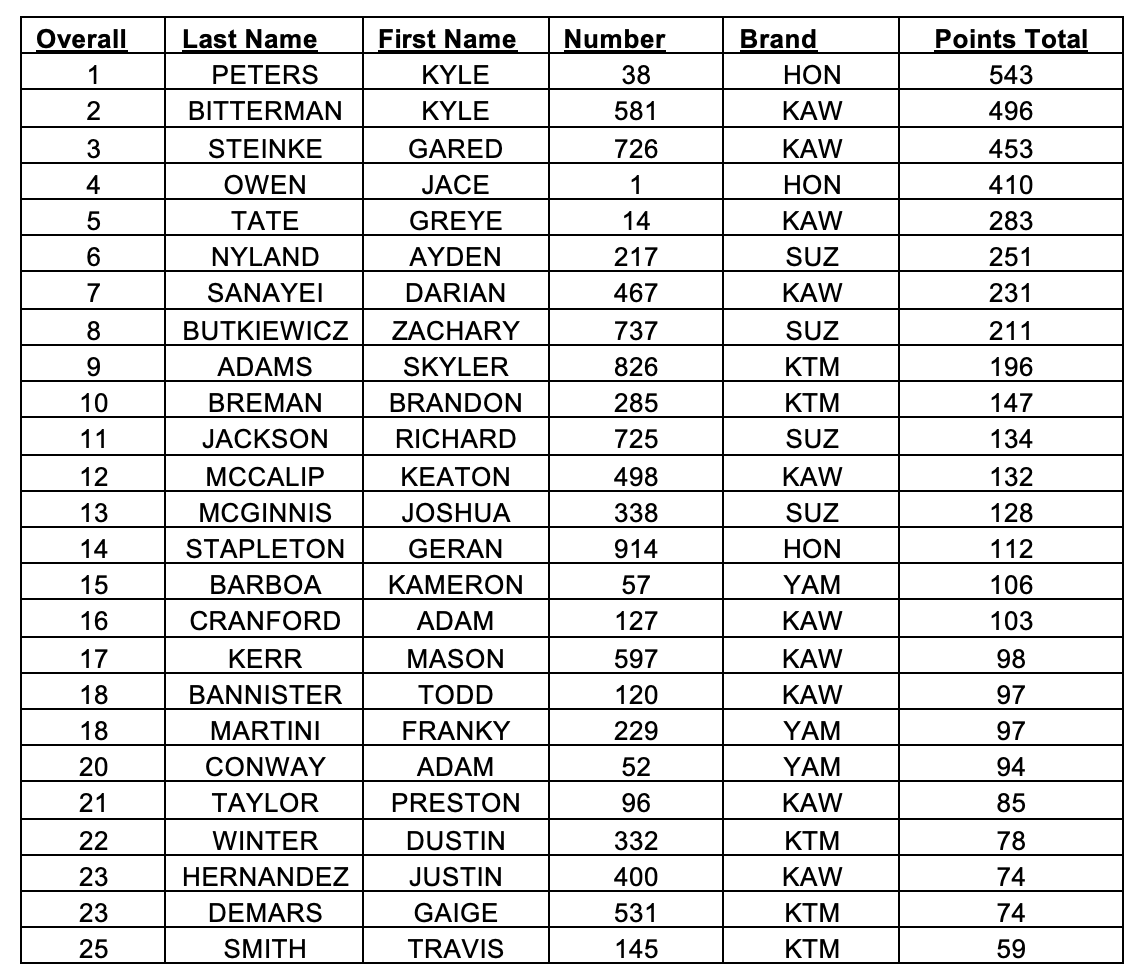