Plenty of bench racing before the season began in regards to the vacant Grand National Cross Country (GNCC) Series throne. Kailub Russell had retired from the series after winning eight-straight titles, and there were many contenders for this year’s crown, including Steward Baylor. But few probably had Stu's younger brother Grant Baylor at the top of their list. While making his debut on the new KLM Milwaukee GasGas team, Grant notched the second win of his GNCC career, firing first in what promises to be a wild season.

Grant even surprised himself, and was nearly speechless in his interview with the RacerTV crew. “I can’t believe it, I really didn’t expect this coming into the first round,” said Baylor. “After last year I just had a really rough year, I just can’t believe it, I came into the first round and got the win. I got a pretty good start there and got into the lead group of guys. We were all battling pretty hard. Toward the end I found myself with Thad on the last two laps. I had Thad [Duvall] right on my back wheel, and toward the end I knew I just had to drop the hammer and break away from him. Last lap I gave it all I had, I broke away a little bit. I couldn’t be happier.”

For the second-straight year cool and partly sunny conditions greeted the pack at the Big Buck GNCC in Union, South Carolina. South Carolina’s Baylor started seventh and steadily made his way through the field of riders, making the pass for the lead with three laps remaining. From there, he held off Thad Duvall for the win.

Stu Baylor, by the way, wasn’t able to even race the GNCC opener due to a gruesome injury suffered at an enduro. That's a massive blow to his title hopes

“It’s 45 minutes from my house, but it’s probably one of my least-favorite tracks of the season,” said the South Carolina native to RacerTV. “To pull it off here, I’m pumped.”

Duvall, back to GNCC competition after missing most of last season with ACL surgery, was second on his Rockstar Energy Husqvarna.

“I felt like I rode really good all day,” said Duvall. “Just struggled at the beginning of the day to get going. Then we got into lappers and I kinda got stuck. So I just put my head down, managed to come back and get the lead. I got the pit board Grant was coming. This track, it’s just a bulldog kind of track and I knew he would be good at that. I tried to ride my own race and he got around. He was just riding a little out of my comfort zone, and in the first race I didn’t want to be laying on the ground. I felt strong all day, bike was working awesome, just hats off to Grant today.” 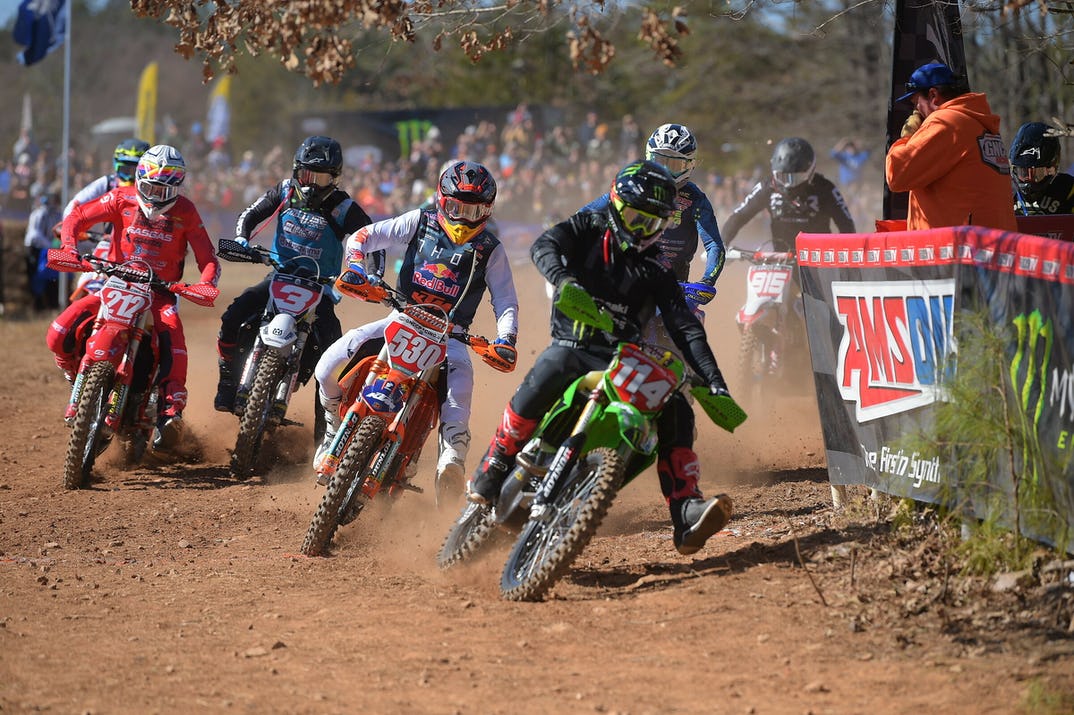 “I’m a little big buggered, actually,” said Strang, using some Australian slang to describe a tough day. “It was a tough one, I think there were 700 riders in the morning race today and the track was beat on the first lap. It was tough all race, and I just couldn’t seem to stay off the ground today. I probably crashed more today than I did all year last year. The lappers were difficult. It’s part of this type of racing, I get it. Myself and [Ben] Kelley were battling on the last lap, he got around me and next thing I saw he was on the ground, so lappers were tough on everybody, I think he might have had the same problem. But, happy to get a third, I was sixth or seventh early, too many mistakes and then I started just clicking stuff off.”

Jordan Ashburn earned fourth overall aboard his new Magna1 Motorsports/Husqvarna team. Ashburn had a rollercoaster ride of a day as he held the lead at one point, and even managed to hold onto third for majority of the race. However, Ashburn would be unable to hold off a hard-charging Strang and would cross the line 12 seconds behind.

After holding the early lead, FMF/KTM Factory Racing’s Ben Kelley would have to make up ground on the third lap as he came through timing and scoring in seventh. As the race went on, Kelley began picking off riders and making the passes stick. By the time the checkered flag waved Kelley had salvaged a top five overall finishing position.

“I was able to battle up front and lead some laps early on but on the third lap, I kind of got balled up with some lappers and took a bad line that got me stuck for almost a minute,” said Kelley in a KTM press release. “I put my head down and charged back as best I could but I had a few more incidents that kept me off the podium. I rode really good and the bike was really good, I just had too many mistakes to stay up front.”

Earning sixth on the day was Coastal GasGas Factory Racing’s Ricky Russell. At the halfway point of racing, Russell found himself running third overall but was pushed back to sixth on a rugged, up and down race day. Russell also missed most of the 2020 season after an injury at round four had him on the mend and is now aboard a new GasGas motorcycle for the 2021 season.

AmPro Yamaha’s Layne Michael would come around on the opening lap in the second place position and ultimately crossed the line seventh in XC1 and eighth overall. Coming through to take eighth in the XC1 class was FMF/KTM Factory Racing’s Josh Toth. Toth was a late-race decision to even ride considering recent injuries.

“Coming into the race being injured, I just tried to ride smooth and be smart about picking my lines,” said Toth. “I got kind of tight and pumped up after riding behind some other riders and I kind of lost the lead group after the first lap. I’m compensating on one hand with everything, so my right arm definitely got more pumped up but it loosened up and I just kind of rode my own race and tried to play it safe. My hand is super sore but it’s coming around. I think I just need some rest and I’ll be ready for Florida.”

Factory Beta’s Cory Buttrick ran a consistent race aboard his new team, earning a top 10 in his class and 16th overall on the day. After making his way to the United States just days ago, and being stuck in the Texas ice storm, RedBull/MCS Racing Sherco’s Benjamin Herrera rounded out the top 10 finishers in the XC1 Open Pro class. Herrera, who is a hard enduro rider, stepped out of his comfort zone to try his hand at the GNCC event. Grabbing the $100 Hot Cams XC2 Holeshot Award was AmPro Yamaha’s Mike Witkowski. As the pack of XC2 250 Pro class riders came through timing and scoring Witkowski would find himself in the fourth place position, as Coastal GasGas Factory Racing’s Jonathan Girroir led the way. Witkowski would put his head down and push, making the pass for the lead stick. After six laps of intense racing Witkowski would cross the finish line first in his class with over a minute gap back to second.

Rockstar Energy Factory Husqvarna Racing’s Craig Delong made his way up to the front after a mid-pack start to the day. DeLong would come through to finish second in XC2, with Babbitt’s Online/Monster Energy/Kawasaki Team Green’s Lyndon Snodgrass rounding out the podium.