MAKE IT FOUR-STRAIGHT IN GNCC FOR STEWARD BAYLOR

Stu Baylor’s comeback attempt in the Grand National Cross Country (GNCC) Series continues, now featuring four-straight wins. That’s just in GNCC, also, because Stu has spent his other weekend’s winning in AMA National Enduro and the U.S. Sprint Enduro Series. Baylor started the GNCC season in a huge hole after missing round one with injury, and struggling at round two with a clutch problem. It’s been all wins since, and after his fourth-straight over the weekend in Indiana, he knows the score.

On this day, Baylor’s stiffest competition down the stretch came from Kelley himself. After Baylor and his AmPro Yamaha teammate Layne Michael got out front early, Kelley put in a charge to get to second and bid for the win. Baylor had enough to hold him off. 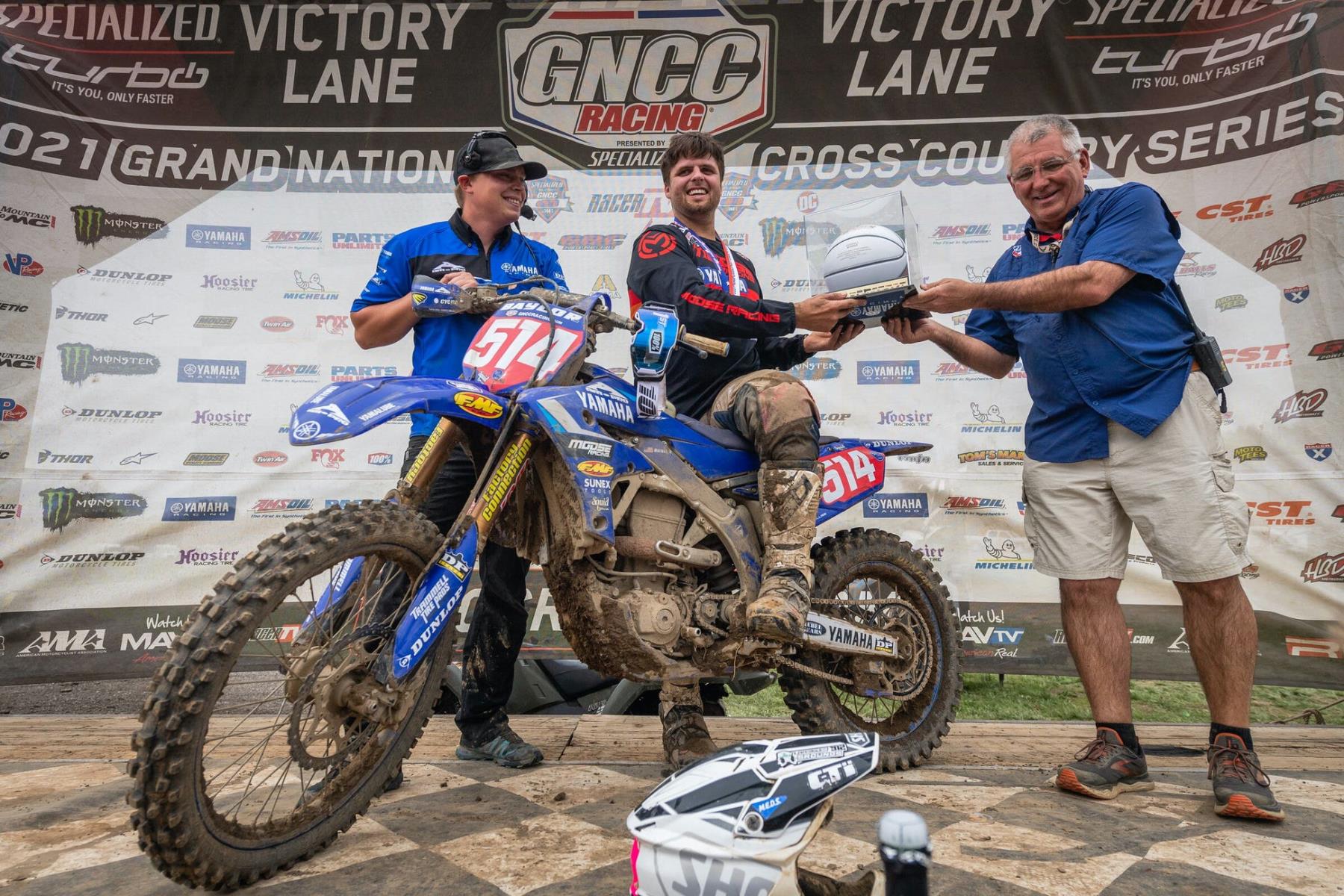 "Yeah, it was really good, I got a pretty good start, I think fourth again, we got into the woods and I made some really quick passes to get into the lead in the first mile,” said Baylor to RacerTV.com. “I made a mistake and Layne got by and I was okay with following him. He was riding good and we were carrying a good pace for a bit. We kind of separated ourselves for quite a while, but then we had one lap where we both struggled with the lappers. We both got stuck in a mud hole and we went from 40 seconds up to I think 7 seconds up on Kelly and Ricky Russell. So, we lost a lot of time there and then it sounds like Layne got hung up again by himself. I was able to separate myself there. I knew Kelly was coming, I put a heater down I think on lap there with three to go. Two to go, I don’t even know what happened. I had had a massive crash earlier, but there at the end, I made a lot of mistakes, I got cleaned by a lapped once and fell on my own once as well. I was really struggling and I think it was down to a seven second lead going into the last lap. I just needed to focus and hit my marks and that’s what we did. I pulled out a good enough lead at the end to ride my own race.”

“He outsmarted me again,” said Kelley. “I had some mistakes there at the beginning that got me down like 45 seconds. Charged the second half of the race, got around Lane and got to second. I was catching Stu, catching him catching him, but he was kind of able to take a break in the middle and then charge hard the last two laps. But I was dead, as you can hear! I gave it my all and that’s all I can ask for.”

AmPro Yamaha’s Michael had an outstanding ride at round six in Indiana, as he came through to finish third overall. Michael would begin his day battling with his teammate at the front of the pack, but as the race wore on Baylor would pull away from his competitors. Michael would then be faced with a battle from a hard-charging Kelley for the second half of the race. Michael would be unable to hold off Kelley but would still earn his first overall podium finish of the 2021 season.

Making his way back towards the front of the XC1 Open Pro class was Rockstar Energy Factory Husqvarna Racing’s Thad Duvall. At just his second race back after an injury earlier in the season, Duvall would continue to gain momentum throughout the three-hour race and eventually make the pass for fourth place.

“I tried to ride my own race at the beginning but I made a lot of mistakes and got super tight,” Duvall said. “I felt really good towards the end, so I just kept hammering. To come out and get fourth at the first race back, I’ll take it. It’s a good building block so we’ll keep building up the pyramid and hopefully we’ll get some wins.”

Magna1 Motorsports/Husqvarna’s Jordan Ashburn found himself running in the third place position at the beginning of the race, after grabbing the $250 All Balls Racing XC1 Holeshot Award. As the race wore on Ashburn would find himself battling with Kelley and then Duvall. As the white flag flew Ashburn would be unable to hold off Duvall any longer, coming through in the fifth place position. Ashburn was still able to end the day strong with a top five overall finishing position.

Crossing the line sixth overall on the day was KLM Milwaukee GasGas’ Grant Baylor. As the race got underway Baylor would find himself buried deep in the pack, coming through timing and scoring 11th on the opening lap. Baylor would continue to push and make the necessary moves towards the front of the competition. When the two-lap card came out, Baylor knew he had to dig deep to try and get into the top five. After moving into sixth on the second-to-last lap, Baylor would be unable to reel in fifth but would still have an impressive ride as he finished sixth overall.

Another rider working his way back from an injury is Rockstar Energy Factory Husqvarna Racing’s Trevor Bollinger. As the race got underway Bollinger would get a top-10 start in the XC1 Open Pro class and continue to push his way up through the competition. Bollinger found himself running sixth by the halfway point, but during the last hour of the race he would drop back to seventh, ultimately finishing out the day in that position.

“This was my fourth race back and we definitely had a better day today,” Bollinger said. “I felt more competitive, even though the results don’t quite show it, and I feel like I had a little more fire in me. I’m looking forward to the next few races, giving me more time to get healthy and get back up front where we belong.”

Coastal GasGas Factory Racing’s Ricky Russell found himself running inside the top five throughout the first three laps of racing. However, Russell seemed to be out of his groove as the race wore on, as he continued to descend back to sixth. For the last three laps Russell would run in the eighth place position, where he would finish for the day.

Coming through to earn ninth was FMF/KTM Factory Racing’s Josh Toth. Toth was able to get off to a mid-pack start but would struggle early on. Toth continued to ride his own race as he settled into his riding technique, crossing the finish line ninth overall.

After a decent start to the race, Babbitt’s Online/Monster Energy/Kawasaki Team Green’s Josh Strang found himself running in the fourth place position. However, just as soon as Strang was running inside the top five disaster would strike and Strang would be forced to head into the pits for an unwanted pit stop to change out his chain guide. Strang would get back to racing, coming through 29th overall then up to 16th overall and as the race continued on, he would dig deep and continue on pushing. Strang would work his way up to 10th in the XC1 class, and 12th overall on the day.

In the XC2 250 Pro class it was Coastal GasGas Factory Racing’s Johnny Girroir battling back to clinch his fifth-straight win of the season. Girroir was off to a top-five start to the day, working his way into second by the halfway point. Girroir would set his sights on AmPro Yamaha’s Mike Witkowski, who held the early lead. Girroir and Witkowski would swap the lead position multiple times, before battling down to the checkered flag where Girroir would finish 0.984 seconds ahead of Witkowski.

Phoenix Racing Honda’s Cody Barnes did not get the start he wanted as he came through 13th on the opening lap. Still, as the race Barnes would continue to push himself to get to the front of the XC2 class. Barnes said he considers the Indiana event his home race as he hails from Illinois. In front of a lot of family and friends, Barnes made the pass for third on the last lap, earning his first podium finish of the season. 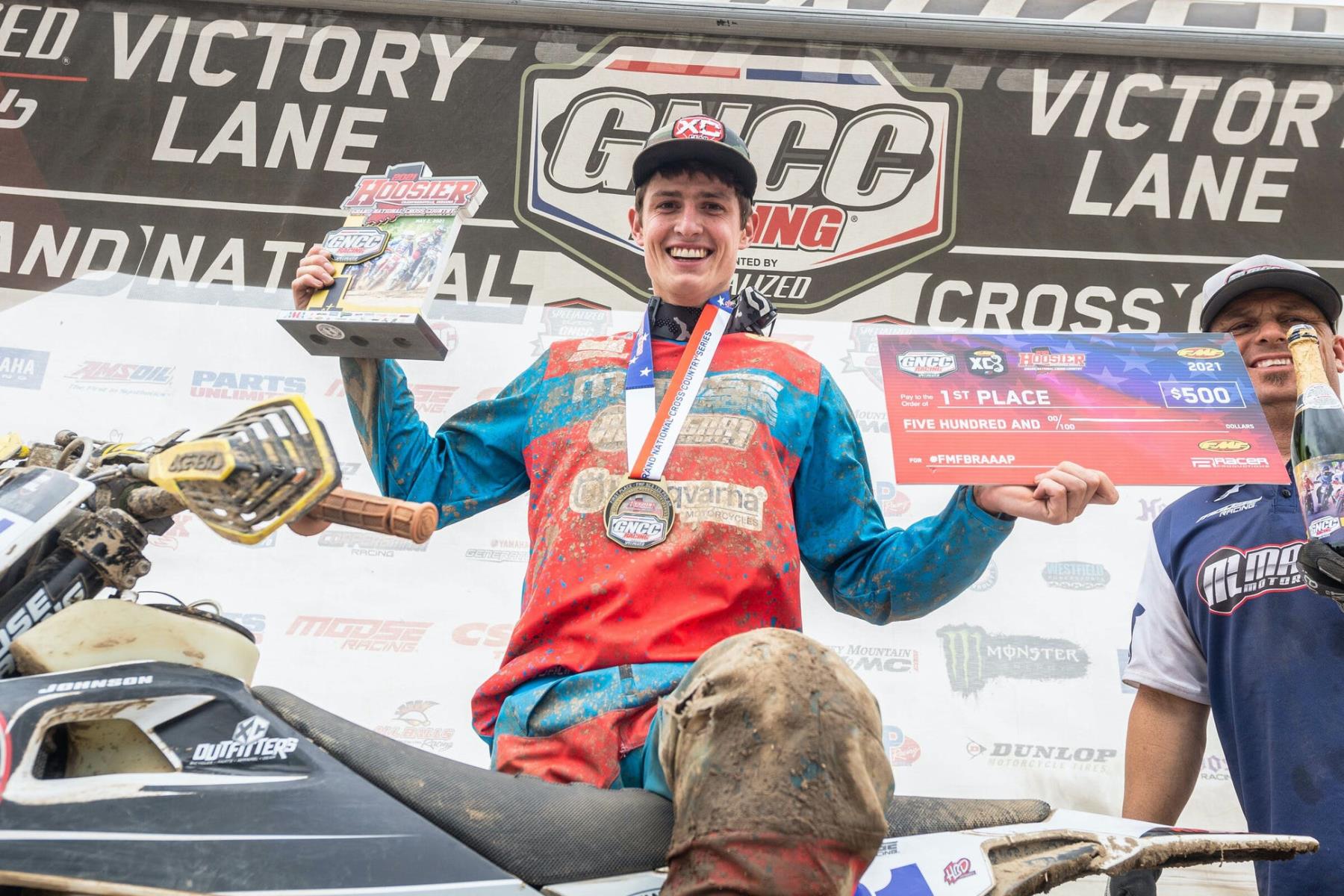 The FMF XC3 125cc Pro-Am class saw Magna1 Motorsports Jonathan Johnsoncontinue his winning ways by earning his sixth-straight win of the season. However, this win would not come as easy as some have. Lojak Yamaha Cycle Sales’ Chase Coleville would hold the early lead and continue to battle with Johnson down to the last lap of racing. Colville would come through to earn second, while Coastal GasGas Factory Racing’s Ben Parsons had a consistent day in the third place position.

The Top Amateur honors from the Hoosier GNCC would go to 250 A’s Joseph Cunningham as he earned his class win and finished 20th overall. Will Sievenpiperwas second on the top amateur podium with a win in the Open A class and a 26th overall finishing position. Third on the podium was the 250 A second place finisher, Tanner Collins with his 28th overall finish.

In the morning race, it was on between the WXC competitors, Red Bull KTM’s Travis Pastrana and Red Bull/Troy Lee Designs GasGas’ Ryan Sipes who raced in the Sportsman A class.

As the green flag waved, it was Preston Raines earning the $100 Trail Jesters WXC holeshot award, but it would soon be AmPro Yamaha’s Rachael Archer taking over the lead for a brief moment before Kawasaki Team Green’s Korie Steede made her move into the number one spot.

However, it would soon be the No. 1 of BABS Racing Yamaha/Fly/Maxxis/Pro Circuit’s Becca Sheets striking for that lead position. As Sheets made her way into the lead, she would begin to place a gap over the rest of the field to ensure her overall win. Sipes was lurking behind her as he would move into second overall on adjusted time. Sheets was able to hold off the competition, and come through to earn her fourth WXC win, and third overall in of the season. Sipes would finish second overall on the day. While Archer came through to take third overall, second in WXC, and Steede rounded out the WXC top three.

As for Pastrana after running second early on in Sportsman A, he said that he had two gnarly crashes, ran out of gas for about 15 minutes, did a front flip and hit a tree third gear pinned. 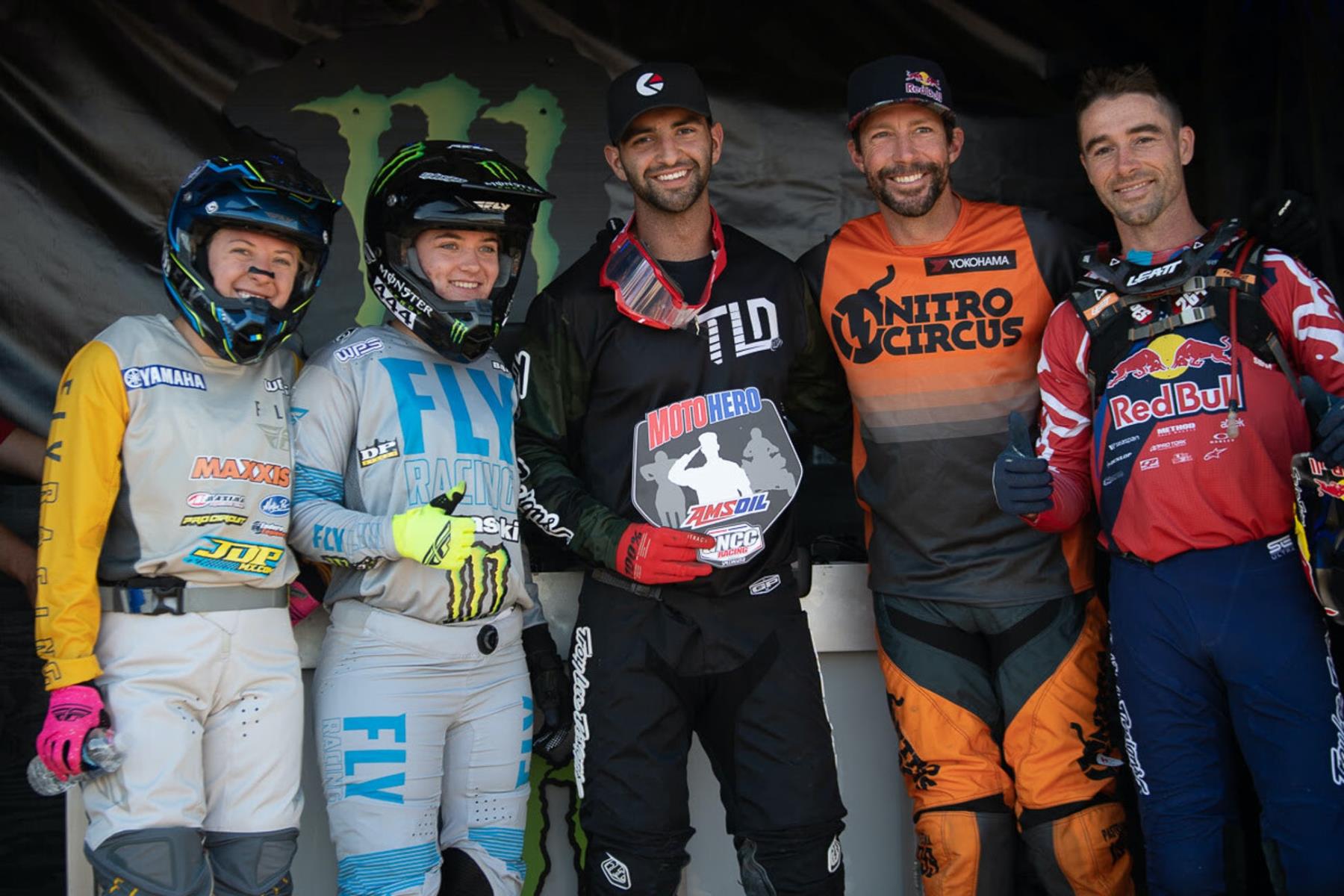 In the 8 a.m. youth race it was Cole Forbes battling back to earn his fourth overall and YXC1 Super Mini Sr. class win of the season. Thor Powell would come through to finish second overall and in the YXC1 class, with Nicholas DeFeo rounding out the top three overall and in the YXC1 class. Ryan Amancio earned his first YXC2 Super Mini Jr. class win of the season just ahead of Robert Weiss and Van Adams, who rounded out the top three. Canyon Richards came to try his hand at GNCC Racing, earning the win in the 85cc (12-13) class, while Jiggs Fustini earned the 85cc (7-11) class win. Richard’s sister, Brighton Richards also earned a win in the Girls (8-15) class. Caleb Wood and Hunter Hawkinberry also earned class wins in the 65cc (10-11) and 65cc (7-9) classes.